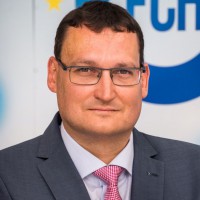 Bart Biebuyck is since 16th May 2016 the Executive Director of the Fuel Cells and Hydrogen Joint Undertaking (FCH JU), a public-private partnership aiming at facilitating the deployment of fuel cells and hydrogen technologies in Europe. Under his leadership, a strong emphasis on cooperation with cities and regions led to the creation of the European Hydrogen Valleys partnership with around 40 European regions. Dissemination of project results, building technology awareness and enhanced basic research became his key focusing points. Before the FCH JU, Bart Biebuyck was at the Fuel Cell department of Toyota Motor Europe where he held the position of Technical Senior Manager. His expertise in the automotive industry includes extensive knowledge related to the deployment of new technologies in the European market. It is as part of the Clean Energy Partnership (CEP) program in Berlin that Bart worked at reinforcing European trials for the Toyota Fuel Cell Vehicle. He also had the opportunity to develop and expand his expertise in Japan, where for two years he worked on the development of Toyota and PSA’s small vehicle. In addition to his industrial experience, Bart has been politically active in his local town since 2006. In 2013 he became the vice president of the City Council, responsible, among others, for the local economy and education. Bart’s term as the Executive Director of the FCH – JU was extended for four years until 15 May 2023.