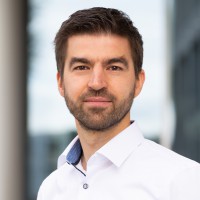 David Vermaas (38) is heading a research lab on water electrolysis and electrochemical conversion at TU Delft and is co-founder of cleantech company AquaBattery. He obtained a cum laude PhD in membrane technology (University of Twente/Wetsus, 2014), and later worked in the company REDstack and at TU Delft. David started as his lab in the Transport Phenomena group at TU Delft in 2016. David’s lab is part of the e-Refinery institute at TU Delft, where over 100 researchers accelerate the energy transition by studying and developing power2X technologies. David’s own group focuses on multiphase mass transport and membrane applications in electrochemical conversion. His current projects include bubble control in water electrolysis, CO2 capture and CO2 conversion, H2-Br2 redox flow batteries and membranes for electrolysis.

David is one of the academic leads in the Climate Action programme, a TU Delft-based programme to leverage TU Delft’s expertise for accelerating the energy transition. David is active, next to his position at TU Delft, as advisor at AquaBattery, which commercializes salt water flow batteries for large-scale electricity storage.