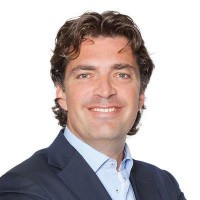 Eduard de Visser (1975) is Director Strategy & Innovation at the Port of Amsterdam. He is responsible for the long-term development and transition strategy of the port, the shareholder relationship and the innovation agenda. Eduard has held various other positions within the port authority. He has been responsible for the corporatization of the Port Authority, the rollout of the international activities of the port, and real estate development. Eduard is married, father of three children and lives in Amsterdam.