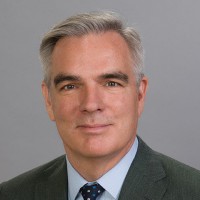 In this role, Erik is leading the company’s efforts to advocate
for the appropriate government policies and regulations that
will be needed to incentivize the wide-scale development and
deployment of carbon capture and storage (CCS)
and hydrogen technologies around the world.

Prior to his current position, Erik was most recently Vice President, Exploration and New
Ventures Americas, for ExxonMobil’s Upstream Business Development Company, where he
oversaw ExxonMobil’s exploration projects in Guyana and Brazil, among others.
Erik joined ExxonMobil in 1991, and has held a variety of technical and managerial positions
in research, production and exploration. After his early years as a research scientist, he
transferred to the Exploration Company’s Middle East division, and then to West Africa.
Later, he held management positions in the Caspian region, Onshore U.S. Production and
Strategic Planning, before becoming a Division Research Manager at the Upstream Research
Company.

In 2008, Erik became Middle East Area Manager, ExxonMobil Exploration Company, and in
2009, transitioned to Regional Operations Manager for Exploration in Europe and
Greenland, based in London.

Oswald is a member of the American Association of Petroleum Geologists, The Geological
Society of London, the Society of Petroleum Engineers, and he is on the National Ocean
Industries Association (NOIA) Board of Directors.
Born and raised in Seattle, Erik holds a bachelor’s degree in Geoscience from the University
of Washington, and a Ph.D. in Earth Sciences from the State University of New York at Stony
Brook. His graduate work looked at the stratigraphy, petrography and geochemistry of
Miocene Carbonates exposed in Southern Spain and the Balearic Islands.