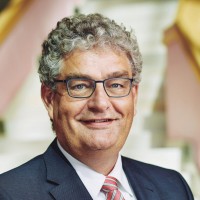 CEO and Chairman of the Executive Board
N.V. Nederlandse Gasunie

Han Fennema graduated from the University of Twente in 1986 (IT). Afterwards, he held various posts within the energy sector. Han began his career with ExxonMobil working his way up from several advisory and management jobs to Director Gas at Esso Aardgas. In 1999 he made the switch to Eneco. He worked successively as Director Strategy for Eneco Group, Director for Eneco Network Management (Stedin) and member of the Board of Directors of Eneco Group. In September 2010 he started as chairman of the Executive Board of infrastructure company Enexis. Besides his position at Enexis he also held the position of president of the trade association Netbeheer Nederland from 2011 until 31 December 2013. From 2014 Han Fennema is CEO and chairman of the Executive Board.