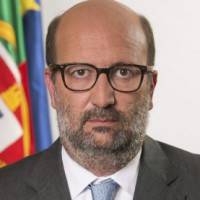 João Pedro Matos Fernandes was born in Águeda, in 1967.
He graduated in Civil Engineering in Faculdade de Engenharia of Universidade do Porto, in 1991, and concluded his Master in Transport, in Instituto Superior Técnico, in Lisbon (1995).
Between 1990 and 1995, he worked in the Northern Region Coordination Commission (Territory Planning), in the transport department.
He was advisor to the Secretary of State of Natural Resources between 1995 and 1997, and he was Head of Office of the Secretary of State Assistant to the Minister of Environment between 1997 and 1999.
He was Director of the company Quarternaire Portugal, Development Consultants between 1999 and 2005.
He was member of the board of Douro and Leixões Port Authority between April 2005 and May 2008, and Chairman of Douro and Leixões Port Authority between April 2008 and May 2012.
He was Chairman of Viana do Castelo Port Authority since its inception, in January 2009, until May 2012.
He was President of the Portuguese Port Authorities’ Association between April 2008 and April 2010.
He was Professor in Instituto Superior Técnico (Infrastructures) and in Instituto Superior de Transportes (Energy and Environmental Consequences of Transport) and lectured in several Masters in Universidade do Porto, Universidade Técnica de Lisboa and Napoles University.
He also participated in many conferences related to Transport, Infrastructures and Territory.
Between June 2012 and December 2013, he was advisor of the board in the company Terminals of North and Ports of North (Manica group), and was manager of Nacala Port, in Mozambique.
Since January 2014, he was President of the board of Águas do Porto.