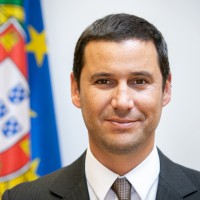 Secretary of State for Environment and Energy
Portugal

João Saldanha de Azevedo Galamba was born in Lisbon in 1976.

He graduated in Economics from the Nova University of Lisbon, Faculty of Economics.

He completed the curriculum part of his PhD in Political Science at the London School of Economics, having lectured on Political Philosophy at the Government Department.

He worked at Banco Santander de Negócios, at the consultancy DiamondCluster International, at the Portuguese Presidency of the Council of the European Union and at the Mission Unit for Integrated Continuing Care.

He was Deputy Minister and Secretary of State for Energy of the XXII Constitutional Government.