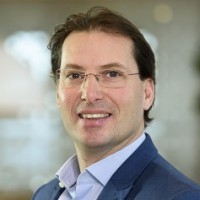 Marc van der Linden (1972) has been appointed Chairman of the Executive Board with effect from 1 February 2017. Before that he was, since December 2012, a member of the board of directors of Eneco Holding NV He started at Eneco in 1997 and held various positions including that of director of Eneco Energy Projects, director of Eneco Installation Companies and director of Eneco Wind. Before that, Marc worked at Van Gansewinkel Groep. He studied Economics at the University of Tilburg.

Other position: Chairman of Netbeheer Nederland, Member of Cyber
Security Council of the Netherlands, Member of Economic Board Zuid-Holland,
Member of Advisory Board of Technical College Rotterdam.