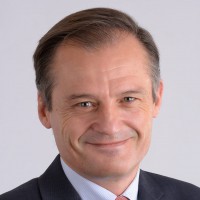 Prior to joining Saudi Aramco, Olivier spent 27 years with Shell, where he held various
roles in Chemicals manufacturing, sales, marketing, and supply chain. Based in France,
the Netherlands, and the United Kingdom, he eventually rose to the position of global
general manager within Chemicals and Lubricants. Olivier then moved on to Houston,
Texas to become vice president of supply, distribution, and Shell pipelines for North America.
From 2013 until 2017, Olivier led various parts of Shell Chemicals as vice president of global intermediates
from the company’s Singapore office before serving as vice president of Chemicals Asia, Ventures and
New Business Development.

During his tenure at Aramco, Olivier has held director positions at the Boards of Satorp, Sadara, FREP
(China) and PRefChem (Malaysia). He is now a Board Director of SABIC and the Chairperson of its Risk and
Sustainability Committee.

Olivier is French, married with four children. He graduated from Ecole Polytechnique in 1988 and holds a
master’s degree in finance from Universite Paris-Dauphine. He also completed an executive MBA at Insead
in 2002