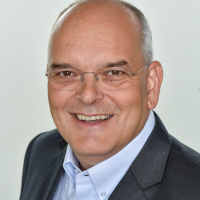 Joining Shell from university with a physics degree from Delft University of Technology in 1988, Stijn has built up a distinguished career through a range of technical, commercial, project and senior leadership roles.

He has held positions in downstream manufacturing technology, project start-up and operations roles across the Netherlands, Japan and Germany. Furthermore, he has worked in Shell’s upstream business, with LNG, commercial and new business development assignments in England, Australia as well as the Netherlands. During the last 10 years with Shell, Stijn has held a number of senior management roles among which the position as CEO and country chair of Shell’s business in Germany In this last role he has been leading significant energy transition work in Germany.

Since early 2019, Stijn has left Shell and moved back to join his family in the Netherlands.  Stijn has taken on the role of Director Commercial at the Port of Rotterdam Authority, responsible for the delivery of key energy transition and other complex transactions.