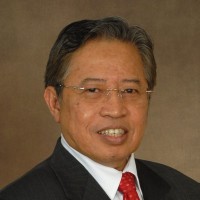 The Right Honourable Datuk Patinggi Tan Sri (Dr) Abang Haji Abdul Rahman Zohari bin
Tun Datuk Abang Haji Openg was appointed as the Sixth Premier of Sarawak on 13th
January 2017. As a man of many accolades and portfolios, he has been a member of
Dewan Undangan Negeri for the Satok state constituency for nine consecutive terms
from 1981 through to 1983, 1987, 1991, 1996, 2001, 2006, 2011 and 2016. He has also
assumed the posts of President of Parti Pesaka Bumiputera Bersatu Sarawak (PBB),
Chairman of Gabungan Parti Sarawak (GPS) and Chairman of Majlis Mesyuarat Kerajaan
Negeri (MKKN).
Currently, The Right Honorable Premier holds the portfolios of the Minister for Finance
and New Economy, Minister for Natural Resources and Urban Development and Minister
for Energy and Environmental Sustainability.
The thrust of his administration lies in the development of emission-free green
technology with a strong focus on Green Hydrogen. In 2017, he formed a Research
Council to oversee various sectors in hydrogen application across various industries,
enabling Sarawak to reduce its reliance on fossil fuel and lower its carbon footprint. To
date, Sarawak under his mantle has forged much significant collaboration with big
renewable energy players across the globe; resulting in progressive technology
transfers, Fuel Cell Vehicle pilot projects and so on.
The Right Honorable Premier also spearheads the pursuit of a Digital Economy with a
view to digitalize Sarawak and transform it into a new, developed and sustainable
economy with high-income by 2030.