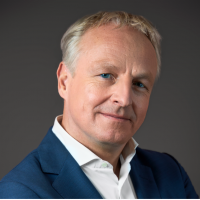 Maarten Wetselaar joined CEPSA as CEO in January 2022 and is based in Madrid. In March 2022 he announced the firm´s “Positive Motion” strategy that is aimed at transforming CEPSA into an Energy Transition leader in years to come.

Prior to joining CEPSA he worked at Royal Dutch Shell for 26 years and served on the firm´s Executive Committee as Director of Integrated Gas, Renewables and Energy Solutions from 2016-2021. In that role he oversaw 38 countries for Shell, including Australia, China, Canada, Japan, Qatar, Russia and Trinidad. Before 2016 he held various financial, commercial and general management positions in Shell’s Upstream, Downstream and Trading businesses in Europe, Singapore, Brazil, Ghana, the Middle East and Russia.

Wetselaar holds a Master’s degree in Economics from the University of Groningen and a postdoctoral degree from VU University Amsterdam in the Netherlands. After his studies he discharged his military service as an officer in the Royal Netherlands Navy.