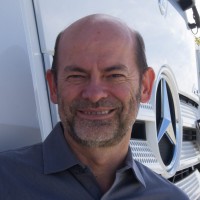 Dr. Schuckert is currently heading the automotive regulatory strategy development of Daimler’s
commercial vehicles for future regulations and Daimler Truck’s International Hydrogen Strategy.
Major topics in that respect amongst others are Heavy Duty and Light Commercial Greenhouse Gas /
CO2 regulations around the world, especially for the US, China, Japan and EU, criteria pollutant
regulations in the Triad and BRIC markets. He is also coordinating Daimler Truck’s fuel strategy
development especially with regard to the future use of hydrogen in transportation and related activities
on the hydrogen infrastructure development for heavy duty vehicles.

In 1998 he joined EvoBus GmbH (100% subsidiary of Daimler Truck AG) as a specialist for automotive
propulsion systems in the research and development department, directly reporting to the Vice
President Engineering. From 2000 onwards he was also responsible for the co-ordination of the CUTE
project – the largest and most successful project on fuel cell busses so far world-wide and also for the
Perth- and Beijing fuel cell bus trials. From 2005 onwards he was responsible for the development of
the next fuel cell bus generation.

He started his career at the University of Stuttgart, leading the department for Life Cycle Assessment
for more than 8 years. After nearly a decade at EvoBus he moved in 2007 to Daimler’s Corporate
Strategy department. Since 2013 he is belonging to the External Affairs Department of Daimler AG.
Manfred Schuckert holds a PH.D. in mechanical engineering from the University of Stuttgart, Germany.
Dr. Schuckert published more than 100 scientific articles world-wide.