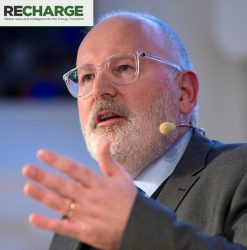 The European Commission is to propose subsidies for green hydrogen known as Carbon Contracts for Difference as part of its REPowerEU scheme, which is due to be unveiled next Wednesday.

And it is likely that there will be strict rules put in place to ensure that the 10 million tonnes of green hydrogen production planned within the EU by 2030 do not use renewable energy that could otherwise be used on the electricity grid.

“As politicians and as public authorities, we can and will help to bridge the cost difference between green hydrogen and dirtier forms of energy in the start phase,” Commission climate chief Frans Timmermans told the World Hydrogen Congress in Rotterdam yesterday. “We have concrete instruments for that — carbon contracts for difference  — and we will make proposals to roll them out massively so that green hydrogen gets the kick-start that it needs.”

And the UK’s Financial Times reported this morning that, according to a draft document it has seen, “hydrogen would only qualify as renewable if during its production it does not increase the use of electricity generated from fossil fuels and if it returned as much renewable electricity to the grid as it used up”.

The Commission had previously indicated that it would only allow green hydrogen projects that sourced their electricity from new renewables facilities, rather than existing ones.

Trade association Hydrogen Europe had been lobbying hard for the Commission to allow green H2 to be produced from existing renewables projects, arguing that the proposed “additionality” rule was self-defeating.

“In a global market where hydrogen projects have to develop rapidly, key players have both internal and external pressure to deliver GWs of electrolysers in the near term, and developers will prioritise countries where regulation and much needed support mechanisms are enablers and not showstoppers to the success of a new sector participating in the energy transition,” the association wrote to the Commission earlier this year.

Commissioners believes that additionality rules are necessary to avoid cannibalising renewable energy that would otherwise help to decarbonise the electricity grid.

It is worth noting that previous leaked drafts of important European Commission energy policy documents have differed significantly from the final versions unveiled to the public.

It is perhaps more important to note the direction of travel and general enthusiasm for green hydrogen among the Commissioners, with Timmermans pointing to last week’s “joint declaration” on electrolyser production, which would boost capacity tenfold to 17.5GW by 2025 and was signed by Internal Market Commissioner Thierry Breton and 20 manufacturers.

Timmermans — who is also the Commission’s executive vice-president for the European Green Deal — told the conference in Rotterdam that green hydrogen was becoming cost-competitive with the 98% of Europe’s hydrogen that is currently produced from unabated natural gas.

“We need to cut our reliance on Russian gas and other fossil fuels, we must move to green hydrogen from renewables as soon as possible,” he said.

As part of this, the permitting of renewables projects inside the bloc will be speeded up, he said, with the Financial Times stating that draft proposals showed the Commission was planning to remove the need for environmental impact assessment in new designated “go-to” areas.

“The EU’s 27 member states, which control energy policy, would be obliged to earmark a sufficient number of these areas to meet the bloc’s renewable energy targets. A ‘strategic’ impact assessment would be needed before an area was selected,” the FT reported.

“Permitting must be accelerated, and it must be accelerated drastically, in clear go-to areas that allow a speedy procedure and ensure nature protection at the same time,” he said. “We have to be very, very creative. In our upcoming plans, we will make concrete proposals to achieve that.”