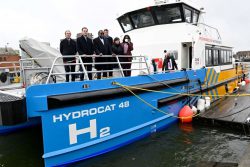 Namibia, a country of abundant wind and sun, has ambitions to be one of Africa’s first green hydrogen export hubs.

In 2021, the Namibian government went to Europe with plans to export three million tonnes per annum of green or renewable energy-produced hydrogen from an area in the south-west of the country as part of a post-Covid economic recovery programme. Germany, on the lookout for green hydrogen supplies, was quick to partner with its former colony. Namibia has an “excellent chance” of succeeding in the global competition for the best green hydrogen technologies and production sites, Federal Research Minister Anja Karliczek said in August 2021. She estimated Namibian green hydrogen could be the cheapest in the world, with costs falling to around €1.50–2.00 per kilogram (/kg).

These are big claims for an industry still only in the pre-feasibility stage – and in a country that has never executed an infrastructure project of this size and complexity. Namibia does not generate enough electricity to meet its own limited demand – only 56% of the population has access to electricity – let alone support large-scale hydrogen production.