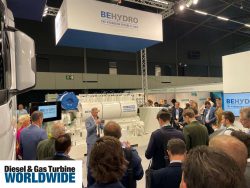 BEH2YDRO is a joint venture between Anglo Belgian Corp. and CMB.TECH.After the successful launch of dual-fuel engines in September 2020, BEH 2 YDRO is now launching 100% hydrogen engines.

“With the launch of this monofuel hydrogen engine we are taking an important next step in the development of our BEH2YDRO engines. BEH2YDRO can now supply both dual fuel and mono-fuel hydrogen applications for a wide range of heavy industrial applications such as shipping, gensets, locomotives, etc. Thanks to BEH2YDRO we can already green a large part of the off-grid industry today.” – Alexander Saverys, CEO CMB.TECH.

The 100% hydrogen engine range has been developed for heavy duty applications and has a power range from 1 MW to 2.6 MW. These hydrogen engines are available in 6- and 8-cylinder in-line engines and 12- and 16-cylinder V-engines. As a main drive or in combination with an alternator, they are a reliable and 100% environmentally friendly source of energy for ships, drilling rigs or other marine applications. They are also suited for driving locomotives.

According to the company, the biggest cost for a hydrogen engine is in the supply and storage of hydrogen. Due to the lack of production volumes in those components, all valves, pipes and sensors are still quite expensive, but the company expects this to decrease sharply in the coming years. 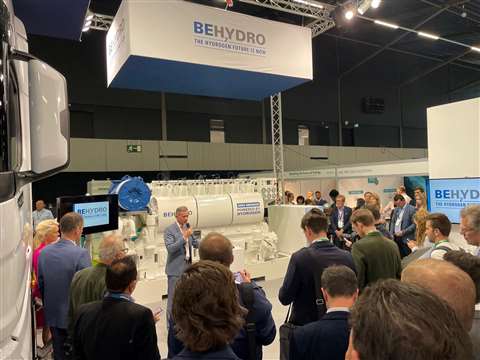 The adjustments to the engine are rather limited. You need to be a motor expert to see the adjustments. The big cost is mainly in the gas tube to bring the hydrogen to the engine in a safe and controlled way. We think that this cost will fall sharply in the coming years, as soon as the consumption volume increases

In addition, the BEH2YDRO hydrogen engines are extremely versatile because they have no problem with slight impurities in the hydrogen. For example, they can also be used to recover waste hydrogen instead of flaring it. The BEH2YDRO 100% hydrogen engines use proven technology and are designed to ensure long term and efficient operation. In addition to their long service life, they are also very easy to maintain. This saves costs and time for owners and operators.

“We can speak of a real milestone here with the BEH2YDRO combustion engines on 100% hydrogen,” said Tim Berckmoes, CEO of Anglo Belgian Corp. “Zero emissions together with high efficiency and simplicity of concept for numerous applications.”

The BEH2YDRO joint venture between ABC and CMB.TECH combines the skills of a multi-fuel engine manufacturer with the insights of a leading shipping company. Many industries such as shipping, railways and power generation need technologies to make the energy transition happen.