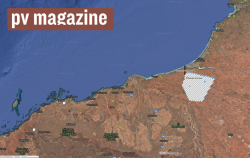 UK-based oil supermajor BP is poised to become the lead developer in the giant Pilbara-based Asian Renewable Energy Hub, according The Australian.

BP is expected to announce a deal for a 30% equity stake in the $36 billion project at the World Hydrogen Summit in Rotterdam this week, according to the outlet. The project is currently being led by InterContinental Energy and CWP Global, with Vestas and Macquarie also holding a stake.

The Asian Renewable Energy Hub (AREH) has been in the planning stages since 2014, getting bigger and bigger every year. In 2017 it was unveiled as a 6 GW hybrid plant, then the plan grew to 9 GW, 11 GW, and now 15 GW.

The 15 GW hybrid plant (10 GW wind, 5 GW solar) is only the first stage though – with its proponents planning to eventually expand to reach 26 GW of renewable wind and solar generation, servicing industries throughout the Pilbara such as mines and mineral processing, as well as Asian markets with green hydrogen and ammonia. Moreover, AREH is promising at least 3 GW of generation capacity for Pilbara energy users themselves.

The project is hoping to start producing power by 2027.

AREH’s current main developers, CWP Global and InterContinental Energy, are also behind an even bigger $100 billion megaproject in Western Australia, the Western Green Energy Hub. This 50 GW project, if realised, would be the world’s largest renewable hub, and is seeking to produce either 3.5 million tonnes of green hydrogen or, alternatively, 20 million tonnes of green ammonia yearly.

Coming back to the Asian Renewable Energy Hub, the project made headlines in June last year when federal environment minister Sussan Ley rejected the proposal.

Ley described the expanded project as “clearly unacceptable,” due to the potential impact on protected Eighty Mile Beach wetlands. Strangely, the decision was made before the project’s proponents had even completed their environmental assessment.

The consortium of developers remained undeterred, saying they would amend the plans and try again. BP must be unfazed by the rejection also.

The World Hydrogen Summit 2022 is being held now in Rotterdam and will continue to Wednesday.