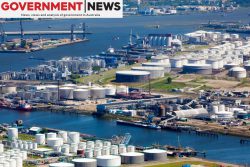 States team up with international partners on clean energy

Queensland has become the second Australian state to sign an agreement with Europe’s largest seaport in the hope of supplying green hydrogen to Europe.

Minister for Energy, Renewables and Hydrogen Mick de Brenni announced last week that Queensland had signed an MOU with the Port of Rotterdam in The Netherlands to collaborate on opportunities to develop a hydrogen export supply chain.

It comes after the WA government last year inked a similar MOU with the port, which is setting itself up as a major hydrogen import hub for Europe.

The Port of Rotterdam has a target to import up to 20 million tonnes of hydrogen by 2050, Mr de Brenni said, and the agreement was an endorsement of the state’s ambitions become a ‘green hydrogen superpower’.

He used a video address to the World Hydrogen Summit last week to sell Queensland’s credentials an investment partner for hydrogen and renewable energy.

“We are tapping our abundance of sunshine, wind and water, our new economy minerals and our skilled workforce to power our energy evolution,” he told world hydrogen leaders.

He also outlined the steps being taken to support a resilient and sustainable renewable energy supply chain, including the state’s $2 billion Renewable Energy and Hydrogen Jobs Fund which encourages publicly owned energy corporations to partner with private sector projects.

“We also have three Queensland Renewable Energy Zones that allow us to coordinate our vast supply of renewable energy and open doors to rapidly develop our green hydrogen hubs,” he said.

Queensland is due to release its 10-year Energy Plan in coming months.