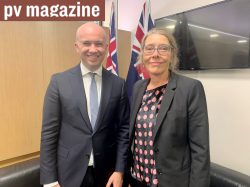 With Australia’s presence felt strongly at the World Hydrogen Summit in Rotterdam last week, state governments are working to secure European markets through partnership agreements. Yesterday, New South Wales signed an initial agreement with Denmark which will see the distant pair support one another on matters of decarbonisation technology and trade.

Just a few days earlier, Queensland’s government signed an MoU with the Netherland’s Port of Rotterdam to collaborate on opportunities to develop a hydrogen export supply chain.On Monday, the New South Wales (NSW) government announced a partnership with Denmark, signing a Memorandum of Understanding (MoU) which outlines the two regions will support collaboration on innovation, policy, trade, investment and technology as they move to net zero emissions by 2050.Somewhat vague in its scope, the announcement gestured towards hydrogen and the NSW treasurer and environment minister Matt Kean’s ambition of establishing the state as a hydrogen frontrunner.

The Danish ambassador to Australia, Pernille Dahler Kardel, also gestured toward collaboration on energy exports as a priority for the two governments, also suggesting the partnership might have a particular eye on hydrogen.“Denmark is a world leader in clean energy, with wind and solar supplying 50% of Denmark’s electricity. Danish companies are also at the forefront of global clean energy technology development,” Kean said.

“This MOU provides a framework not only for NSW to learn from Denmark, but for Denmark to benefit from our experiences developing Renewable Energy Zones, the Peak Demand Reduction Scheme and the Energy Security Safeguard,” he added.Before NSW linked with Denmark, the Queensland government announced its MoU agreement with the Netherlands and its Port of Rotterdam, Europe’s largest.Queensland Minister for Energy, Renewables and Hydrogen Mick de Brenni announced last week an MoU had been signed with the port to collaborate on opportunities to develop a hydrogen export supply chain.“The Port of Rotterdam has a target to import up to 20 million tonnes of hydrogen by 2050, starting with imports of ammonia in 2025,” de Brenni said, noting the agreement solidified Queenland’s role in realising that target.